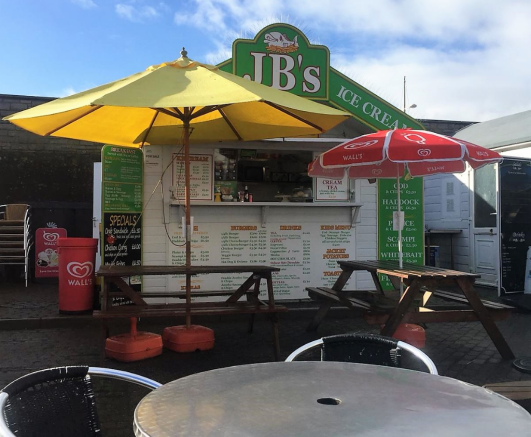 Description: An opportunity to acquire an established popular daytime café/takeaway, enjoying a lucrative and desirable coastal trading position, currently operated on a seasonal basis opening favourable hours to suit the lifestyle of the owner, offering new owners considerable further potential. Operating from well-equipped premises, the inventory commanding a substantial replacement cost, to include valuable soft ice cream machine and bean to cup coffee machine. A most attractive feature of the proposition is the alfresco seating area which the business boasts, offering up to 40 covers, benefiting from an alcohol licence. Such is the length of time established a great deal of regular trade is enjoyed boosted by the huge number of visitors and holidaymakers to the area.
Location: Occupying a desirable and lucrative trading position overlooking West Bay Harbour, situated on the western side, on route to the Harbour Masters office with the Esplanade and its parking, together with the beach close by. Adjacent are contemporary apartments with West Bay holiday park close by. West Bay lies on the South West Coastal Path, 1½ miles from the bustling West Dorset town of Bridport, recently made famous by being the backdrop to ITV's flagship drama 'Broadchurch a mecca for tourists and day trippers during the summer months, a major gateway to the Jurassic Coast which covers 95 miles of coast from Orcombe Rocks at Exmouth, Devon, to Studland Bay in Dorset. The coastline is known as the Dinosaur Coast, situated in Lyme Bay, tourists and students throughout the world visit West Dorset for fossil hunting in stunning coastal scenery. The famous sandstone East Cliff at West Bay exposes 180 million years of history whilst the nearby A35 provides good road links with the remainder of Dorset and the neighbouring county of Devon, Lyme Regis approximately 11 miles to the west and Dorchester 16 miles to the east.
Premises: As with other similar businesses on the harbour, busines owners actually own their building and it is only the land on which the building sits which is leased. The building is of wooden construction with pitched roof, attractively presented with eye catching livery, side pedestrian entrance door opening to the PREPARATION/KITCHEN/SERVING AREA, raised floor, fitted with some easy wipe cladding to the walls, stainless steel sink unit with hot water heater over and stainless steel wall shelving. Contains a host of equipment, amongst the inventory, 2 large fryers, twin basket fryer, chip scuttle, griddle, contact grill, 2 toasters, soft ice cream machine, bean to cup coffee machine, 3 under counter fridges and 3 under counter freezers. (None of the above appliances /systems have been tested and a purchaser must satisfy themselves as to the serviceability of these.)
Outside: To the front of the premises, freestanding tables and chairs providing covers for up to 40 persons, includes large 8 seater tables and picnic style tables together with traditional tables/chairs. To the rear of the premises, STOREROOM, contains 2 fridges and 1 freezer, close by is a further brick built STOREROOM, and contains upright fridge and upright freezer with space for an additional fridge/freezer.
Business: Acquired by the vendor in 2007 since which considerable success has been enjoyed, only now offered for sale due to a change in family/personal circumstances. Serving a popular menu to eat on the premises or takeaway, menu lines comprise breakfast, lunches and snacks, items include breakfast rolls, burgers, fish & chips, scampi, fishcakes, jacket potato's, toasties and sandwiches together with various accompaniments, hot and cold drinks to include alcoholic beverages. Such is the trading position and lucrative seating the business proves most popular, in particular with the many day trippers and holidaymakers visiting the area, boosted by the large nearby caravan/holiday park from which trade is received.
Trading Hours: Opening hours are flexible depending on the time of the year and the weather. The vendor chooses to trade daytimes only, typically 8.00am through to 3.00pm, opening February half term and trading through to October half term. Ample scope exists to increase these hours and open longer along with other catering establishments in the area, we understand the business is licenced to trade from 7.00am to 11.00pm and the alcohol licence running from 10.00am to 10.00pm.
Staff: Operated by the sole vendor with the assistance of some part time summer seasonal staff, the business would prove ideal for a couple.
Takings: With the business currently operated at a low level to suit the lifestyle of the vendor, takings are purposefully kept below the VAT threshold which currently stands at £85,000. In line with other businesses in the area considerable scope exists to increase takings well into 6 figures should new owners wish to develop the business and build on the current successful levels of trade, albeit the business still proves profitable whilst operated on the current low level basis, enabling the owner to only trade 8 months of the year.
Comments: The sale of JB's provides an opportunity to acquire uniquely positioned café/takeaway premises with the added benefit of alfresco seating and an alcohol licence. Coupled with this is an established popular business which lends itself to further development through increased menu lines and opening hours, in particular in the summer months when it could open into the evening taking advantage of the alfresco seating and alcohol licence.
Tenure: The land is held on the residue of a 7 year Lease from West Dorset District Council which was last renewed in December 2015 for a term of 7 years, current rent £11,000 per annum, increasing to 13,000 in 2020. The Lease excludes the provisions of Sections 24 to 28 of the Landlord and Tenant Act 1954 (security of tenure), we understand a new 7 year Lease would be available to new owners.
Rates: Currently 'Nil' after 100% business rate relief.
Price: £159,000 for the benefit of the Leasehold, Goodwill, Fixtures, Fittings & Equipment (according to inventory) plus stock at valuation.