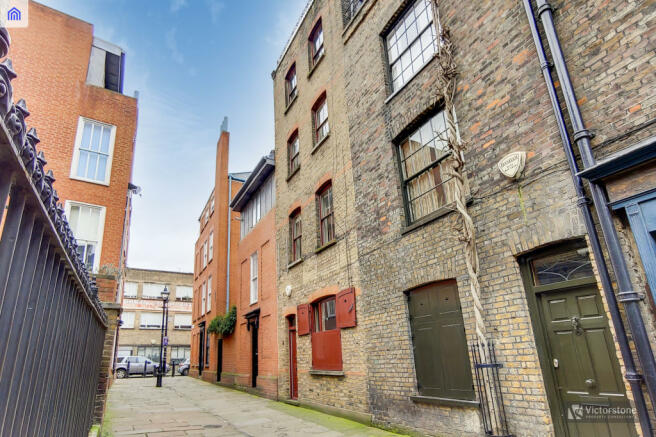 **VIRTUAL TOUR AVAILABLE**
PUBLIC NOTICE Victorstone are now in receipt of an offer for the sum of £1,380,000 for 8 Puma Court, E1 6QG. Anyone wishing to place an offer on this property should contact Victorstone, 213 City Road, EC1V 1JN, before exchange of contracts
Victorstone are delighted to present to market this stunning Georgian Townhouse in the enviable Spitalfields location that is Puma Court.
Spitalfields is an area historically associated with the silk weaving industry, Jack the Ripper, South-Asian cuisine its thriving street-market - Brick Lane.
Having fled from religious persecution in mainland France in the 1680's French Huguenot silk-weavers settled in large numbers in Spitalfields and thus the area became known colloquially as 'Weavers Town'. The Upper-classes began incorporating more silk into their attire and the the merchants of Spitalfields became incredibly wealthy and constructed lavish townhouses of which many survive today.
Spitalfields went into decline in the 19th century with the area playing host to some of London's most notorious slums. In recent years the area has undergone an incredible transformation with Whitechapel, Shoreditch and Spitalfields rapidly becoming some of East London's most desireable areas. Shoreditch is considered the hub of East London's nightlife whilst Spitalfields market offers a plethora of exciting food stalls, luxury goods retailers and independent stores.The area is bursting with quality restaurants such as the forever popular Persian inspired Dishoom, the Thai classic Som Saa or highly regarded Flat Iron.
Originally named Red Lyon Court, Puma Court is a wide alleyway leading right up to the entrance of Spitalfields market. Set away from the main road and looking out onto the famous almshouses opposite are a row of four small 18th century weavers houses built circa 1740. Though modified and extended over the centuries they still retain many architectural features of the period and are unique as they comprise the last surviving alley of small weavers’ houses in Spitalfields.
Set over five floors and boasting nearly 1600 sq ft of internal living space this charming property offers to extensive and versatile living space throughout. The property briefly comprises five double bedrooms, two bathrooms (with two additional shower rooms) huge sit-in kitchen, separate living room, private courtyard garden and private roof terrace.
The property has been renovated and modernised to a high standard yet many of the historic features such as the sash windows (and shutters), wall panelling, fireplaces and floorboards remaining.
This property is exceptionally well-located for public transport with Aldgate East Underground station (Ham & City, District lines) within 5 minutes walk, Liverpool Street Street Station (Central, Circle, Metropolitan, Elizabeth, Ham & City lines and National Rail) and Shoreditch High Street (Overground) less than 10 minutes walk away.
This is a rare opportunity to purchase a truly gorgeous property in a premium Zone 1 location. A stunning period home with period features yet with all the modern comforts and has the ability to become a real statement property.