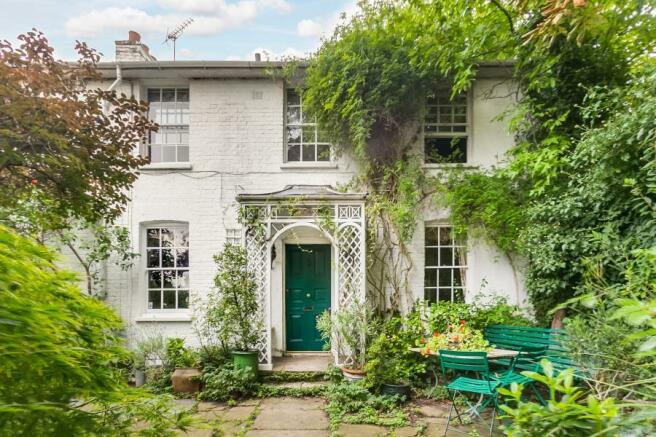 A matchless and exquisite wide detached double fronted Georgian house in part dating back as far as 1697. Initially a farmhouse on the historic Burlington Estate the property has been sensitively extended and altered over time using materials from the era including 17th century handmade bricks from the demolition of the Royal Mint building, Georgian panelling and period floorboards throughout. This splendid house enjoys a country way of living in suburban London with fabulous, sweeping south-facing views overlooking the River Thames, raised and set back from the river bank with mature, self-contained and private front and rear gardens. The house is laterally arranged mostly over two floors. On the ground floor there is a double-aspect reception room, a formal dining room, a craftsman-built country style kitchen and an architect-designed conservatory extension with French doors opening completely to the rear garden, ideal as a sun room or dining room. The annexe to the rear is the oldest part/feature of the house, self-contained yet contiguous with the house, leading from either the conservatory or garage comprising a bedroom, bathroom, sitting room and reception room that is currently used as an office. A beautifully kept, very private paved and walled garden is accessed via the conservatory, the main reception room and the entrance hall. In addition stairs off the entrance hallway lead to a snug TV room in the basement and there is a ground floor W/C. The first floor comprises a master bedroom with a walk-in closet and stunning south facing views over the river, three further bedrooms, two of which face the river, a separate dressing area off the hallway leading to a bathroom and a second bathroom off the landing. Hill Cottage is an extremely distinctive property with an abundance of character and adventure. It has an 18th century farmhouse feel with period features throughout. Country style living can be enjoyed here in an outer London location, only a 20 to 30-minute drive to central London. Strand-on-the-Green is located to the east of Kew Bridge, along the north bank of the river Thames in Chiswick. The area is well-known as a particularly picturesque stretch of the river Thames, originally a fishing village. There are excellent schools located within a short walk away along Strand on the Green and by Kew Green, and elsewhere locally. Chiswick House Grounds and Gunnersbury Park are also easily accessible and run along either side of the river.The Towpath runs along the bank of the river, overlooked by imposing 18th-century houses and picturesque pubs. Gunnersbury station (District Line and London Overground) is a short walk away from Strand on the Green, and Kew Bridge railway station is also very close by for fast train routes to Clapham Junction and Waterloo. EPC = E


To view this property or request more details, contact: