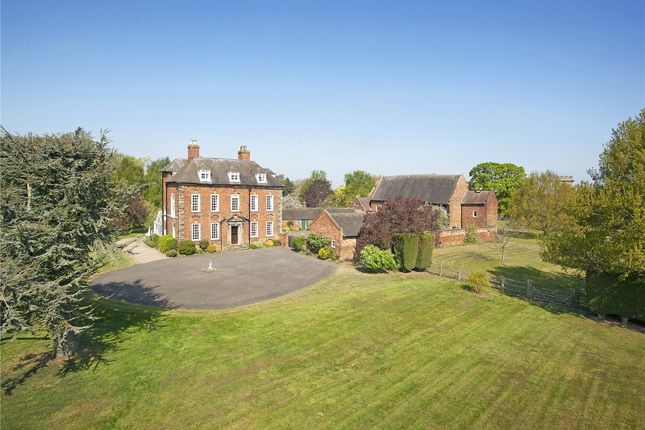 The Old Hall, Mavesyn Ridware is an exquisitely beautiful Grade II* country house set on the edge of the beautiful and unspoilt small village.

The Old Hall is situated some 8 miles from the cathedral city of Lichfield, offering both culture and easy access via the West Coast train line taking one hour sixteen minutes to Euston.

There are also regular trains from Rugeley taking one hour 35 minutes. Communications are excellent being only 10 miles from the M6 toll road linking into the main national motorway network. Birmingham International Airport is some 27 miles distant.

The city centre at Birmingham is 30 miles away with excellent rail links to both Lichfield and Rugeley Mavesyn Ridware is a particularly beautiful village containing six listed buildings. Of these, two are Grade I, one being the Gatehouse at The Old Hall, the other the church.

The Old Hall is Grade II* and sits close to St Nicholasâ Church, largely built in 1782 and founded in about 1140 with the Tower being earlier dating from the fifteenth century.

There has been a house at The Old Hall from early times. The Mauvesyns were Lords of the Manor by the first year of the 12th century.
They were locally important knights but died out with the death of Sir Robert Mauvesyn at The Battle of Shrewsbury in 1403. He was the serving High Sheriff of Staffordshire at the time and was the builder of the Gatehouse. The original house dated from about 1140 and was significantly larger with the impressive Gatehouse being the only part remaining. Indeed, the roof timber rings indicate that the timbers were felled in 1391-2.

The Old Hall was built in 1718 in a classic Queen Anne style, with perfect symmetry with later eighteenth and nineteenth century additions. The house is approached through an arch under the historic Grade I Gatehouse sweeping to the front of the house with far reaching views over farmland. The Old Hall is formal yet manageable and well suited to modern-day living.

In recent years, the house has been informally divided into two parts, to suit family use, but could easily be reincorporated to create one single dwelling.

The principal rooms are elegant and well proportioned, all with fabulous views over differing aspects of the garden.
The front door leads into a charming hall with elegant staircase beyond. To the right is a well-proportioned, partially panelled drawing room with a dining room opposite being a lovely, panelled room with views over the garden. In the Dining Room and on the main staircase are some fine examples of heraldic stain glass. There is a large kitchen opening out into a garden room/conservatory.

Both parts of the house are laid out on three floors with five bedrooms and three bathrooms in the main part. The adjacent guest wing/annexe has a separate drawing room, conservatory and kitchen together with a further four bedrooms and two bathrooms.
The gatehouse

The Gatehouse is listed Grade I and is undoubtedly of national importance believing to date from 1391/2 and is thought to have the only double crown post in Staffordshire. The timber work within the medieval structure is some of the finest in the country. The Gatehouse could either be used to provide entertaining space or, potentially, as a wedding venue, particularly with St Nicholasâ Church within walking distance.
Gardens & grounds

The house is surrounded by enchanting gardens and grounds, which beautifully complement the house running down to a small stream to the southern side. To the rear of the house is a private Walled Garden and a vegetable garden. There is a grass tennis court. To the west is a very substantial range of outbuildings including an artistâs studio. Also is an open fronted garage block for three cars.

From Lichfield ( M6 TollRoad): Take Junction T4. Proceed
north to Lichfield. At the roundabout take the 3rd exit
onto The Friary. At the next roundabout take the 4th exit
on the roundabout on to A51. After just after 2 miles take
A515. After 1.5 miles turn left onto B5014. In the village
of Mavesyn Ridware the entrance to The Old Hall is
immediately after the Church. View more View less